Posted by Jeff Carreira on August 16, 2011 in Uncategorized | 3 Comments 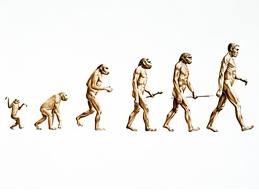 Recently I heard a recording of a talk given in London by my friend and colleague Carter Phipps. Carter is the author of the forth coming book Evolutionaries: The People, Passions, and Perspectives that are Forging a New Synthesis of Science & Spirit that will be published next spring. In his talk he made a simple yet profound point. He stated that in his study of evolutionary thinkers past and present what he has found is that the particular view on evolution that any thinker has is largely determined by whatever it is that they think is evolving.

I found this to be an intriguing thought. What is it that different evolutionary thinkers believe is evolving? It stuck me as a more profound question than it appeared at first . Carter Phipps mentioned that if, for instance, you believe that what is most fundamentally evolving is DNA then you are going to have one view of evolution. If you believe that it is most essentially ‘information’ that is evolving then you tend to have a different view. Etc.

As I thought about this I immediately thought of Charles Darwin himself. He was most concerned with the evolution of living species. His theory of natural selection was conceived based on what he was looking at, which is how one species transforms into something different over the course of generations.

What about the American Pragmatist philosophers? Each of the three founding Pragmatists, Charles Sanders Peirce, William James and John Dewey, seem to have a different conception of  – or at least a different focus on – what it is that is evolving.

Peirce had perhaps the widest view – everything is evolving; or perhaps better stated – it is reality itself that is evolving. His evolutionary theory starts with pure possibility before anything existed. From there everything evolved including time, space, the laws of physics, and only then light, matter, planets, life, consciousness etc.

William James in his philosophy had what Peirce felt was an overly human-centric orientation. What James was concerned with was the evolution of experience. And since James believed that reality was made up of pure experience then he, I suppose, would agree with Peirce that everything is evolving. Reality is experience; experience is evolving, so reality is evolving.

John Dewey was the most socially engaged of the three and he seemed to be interested in the evolution of ideas and culture. Big ideas like democracy and education occupied his attention. As the ideas that a society holds evolve and become assimilated, the society itself changes and evolves.

If I look at pragmatism as a whole I might say that it is a school of thought that sees activity as the fundamental thing that evolves. Activity is change. If nothing changes there is no activity. As the universe evolves novel possibilities for new types of activity/change come into being. At the same time some forms of activity that were possible become impossible – or at least much less possible. 1000 years ago it was not possible to send a human being to the moon. And, on the other hand, many forms of brutal behavior that were common some time ago no longer take place, or if they do in the rarest of occurrences.

As we think about evolution the question that Carter raised is an interesting one to consider – what is most fundamental thing that is evolving in this universe?

← Why Philosophy is Still not a Luxury? Nothingness and Firstness →