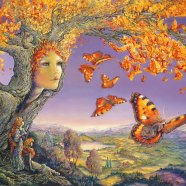 Posted by Jeff Carreira on November 23, 2012 in Spontaneity, Flow and Creativity, Uncategorized | 5 Comments

The art scene in New York in the fifties was a living hotbed for a new way of thinking and new conceptions about reality. Avant-garde painters, writers, musicians and more, were infused with a new conception of reality and a new possibility for human life.

One of the books that was inspiring them was Alfred North Whitehead’s “Adventures of Ideas.” In that book Whitehead describes how he sees the great epochs of human history evolve from age to age and more specifically how ideas drive and shape each successive shift in human history. How did the Roman world transform into the Christian world of the Middle Ages? What were the ideas that were guiding and shaping that transformation?

Whitehead believed that epochs appear in human history by the infection of ‘great ideas’ into our cultural practices. In the first stage of this process of cultural infection a great idea takes up residence as “speculative suggestions in the mind of a small, gifted group.” From this group a new collection of literature becomes generated that appreciates and illuminates the great idea that is being held.

The great idea is initially a general idea – broad and somewhat vague expression of an expansive understanding of what is real and significant in human life. This great idea is held, and worked among the small group of individuals who hold it. In this way a general idea exists in “the background, flitteringly, waveringly” – realized only by a few in its fullest implication – “or perhaps never expressed in any adequate universal form with persuasive force.”

And so this great idea lingers in the background of culture as it did in the bars, coffee houses, and night clubs of New York City in the 1950’s. It is itself ever in danger of never coming to its fullest fruition and at the same time – if it is truly a great idea – it presents a constant threat to the dominant culture around it.

According to Whitehead the great idea does not infect culture by being fully expressed in its universal form and presented to win over the heart and mind of society at large. It remains in the background, consciously recognized by a small group of people, but still there in the unconscious recesses of society. And then in moments of necessity, or of creative expression, it bursts out as a particular expression of itself. The great idea reveals itself in the form of peculiar adaptations to specific circumstances.

In the arts the great idea shows itself as a new form of poetry, or a new form of painting or dance. The expression of the great idea is not limited to the arts however. Manifestation of it will be found in new ways of doing business, innovations in science, new lifestyles. In the words of Whitehead, “It is a hidden driving force, haunting humanity and ever appearing in specialized guise…”

The specific instances of application of the great idea exemplify the grandeur of the wider truth that it arises from – a truth which, mankind having grown enough, is able to feel, although not yet sufficently perhaps to bring into full expression.

As I see it, Whitehead gave small groups of forward-thinking people the social role of incubating ideas which would later become the norm of society. This incubation function, however, was not something he pictured as existing outside of society. These new great ideas might have be consciously available only to a small group of people, but because it was being consciously held in their minds, it was also unconsciously available to the larger social mind. Because you cannot separate the smaller group from society as a whole, the ideas they were working with were available to the larger society and would emerge as spontaneous novel responses to circumstances, through people who would not know where those new responses had come from.

What was inspiring the Avant-Garde artists in New York in the fifties was that they were all expressing specific instances of the application of a broader great idea that was squeezing into the forefront of culture through their art. In this way they saw themselves not only as creators of beauty, but as agents of cultural evolution.

Please download my eBook “Philosophy is not a Luxury” as a gift in appreciation for your readership.

← Art and the Evolution of Consciousness Meditate into Deep Trust →